Once again too much stuff going on, so we chose the bird nesting area the OFM circled on his one mile walk this morning for tonight’s blog.

The bird nesting area is closed to folks each year while a few hundred birds make nests and raise their children to adult hood. We have seen it in action several times and it can be quite interesting. But today there are no birds there and the powers that be are working on getting it ready for the feathered visitors.

Hurricane Harvey destroyed the last viewing platform.  Now a new nicer one is in progress. It over looks the main area and can hold about 8 camera tripods at one time we guess.

The fencing provided to protect the area is a wire rope nailed to 8“ posts about 2 feet high. To the best of our memory it was put in about 8-10 years ago.  In this next picture you can see the temporary repair they had to make at one spot where the wire rope has already rusted through. Salt water corrosion is a mean enemy.

At another location in the area, some blue crabs had been turned into a meal for some of the birds it looked like. This claw was about 6“ long and the body was nearby. Lots of signs of birds having a feast was all around the spot. The claw is from a female blue crab. How does the OFM know it was a female crab? Well he has been around the salt water events since 1946. His mother taught him that the female blue crabs have red claw tips like they are wearing red fingernail polish.  His observations since then have found that to be true.

And at another waterfront spot was this unusual scene. A dragon fly was floating on the light green water of the bay. After watching it for a few minutes we decided it was dead.  It still makes an interesting picture we think. 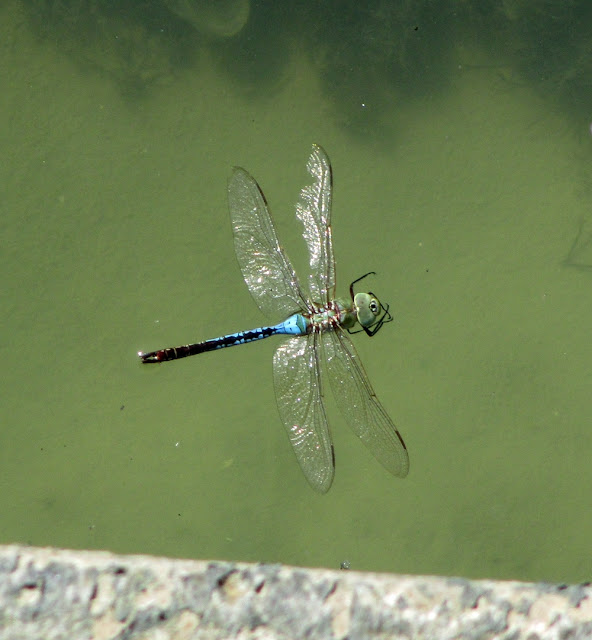 And there you have another way we enjoyed  trying to have tooooo much fun.