The OFM got himself ready and headed out onto the Rockport Beach wooden pier to get in some decent fishing for the first time in over six months. He did have a few less than perfect casts at first but it all quickly came back to him and the fun began.

He was getting small pecks from something for several casts. Then something got serious and the fight was on. Soon it was seen that the fish was a speckled trout that hit the Gold imitation minnow lure. When the trout hit the deck of the pier, it did not quit fighting very quickly. But we did finally get the required picture of the OFM's foot. 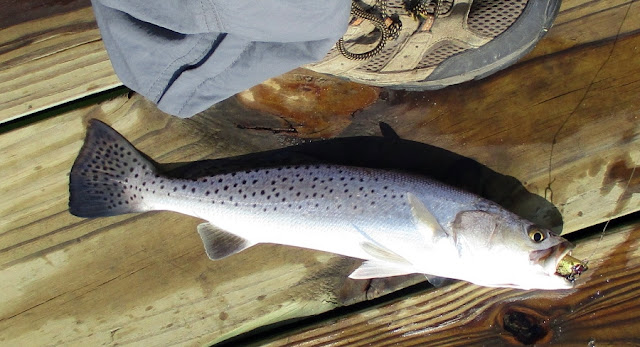 It was released back into the water and the fishing continued. There were several needle nose gar messing around the pier pilings and one was silly enough to hit the lure. It was a good fight for about a minute before the gar slung the lure from its mouth.

We fished a little more then headed back to shore to get some chores done. We are leaving the State Park in the morning.


While messing around town later in the day we did stop to get a picture of the semi-famous Rockport Crab. The original crab was destroyed by hurricane Harvey. This new one was installed finally to replace the original one. It is pretty nice in our opinion.

Late in the evening the wind got to blowing strongly and the wave action was blasting over the bulkhead and attached walkway. It would have been a good time to get a bath in fresh saltwater while walking.

Just so they could have some fun too, the clouds got to playing in the wind and making all sorts of funny shapes. Here is a nice picture of some boat masts and red net towing arms trying to grab a cloud or three. 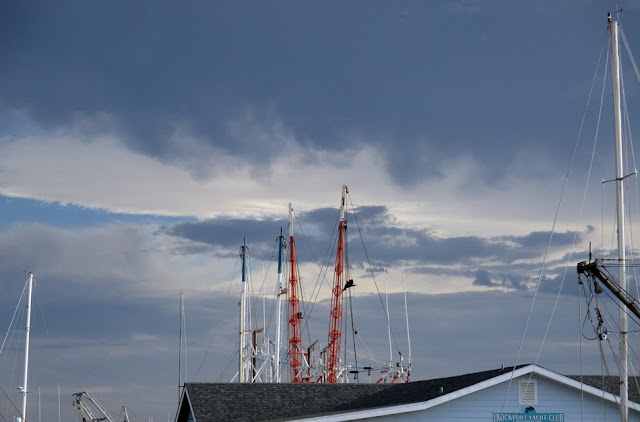 An important to us decision was made this afternoon. We will be moving to an RV campground we have been in before. The plan is to stay here until January since this is the best time of the year on this part of the coast. A few things we have planned involve Texas BBQ, fresh cooked shrimp, lures and fish, surf, beach combing and plenty of great Tex-Mex food with sweet tea. Of course there are a few more ways you will read about here on the things to do on the Gulf of Mexico Texas coast for trying to have tooooo much fun.