It was late getting out his morning since the OFM slept 10.5 hours last night/this morning. We managed to get in an entire loop road walk with out much pain.

One thing that was conspicuous was the large quantity of bag worm nests in lots of the trees. 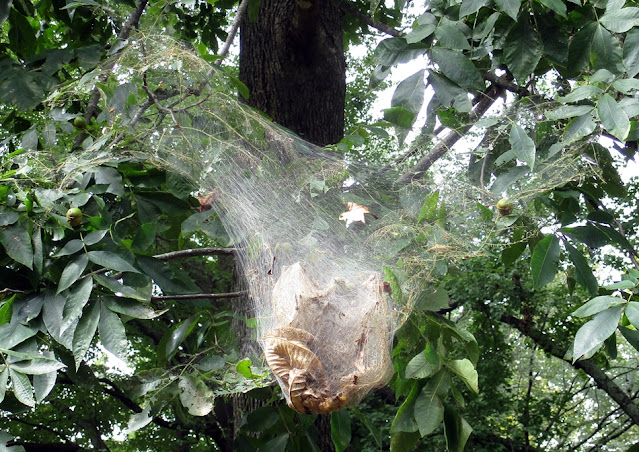 Those critters are no good for nothing in our reference books. But there is a lot of them this year.


Right after we started the walk we came upon some maintenance work being done near the path.

An old rotten tree was being taken down before it fell on somebody on the trail. They did a great job of getting it down and grinding away the stump. If we are lucky they will keep on working along the path until the rest of the rotten and ready to fall trees are removed. As far as we are concerned they could just as well leave the stump and let it naturally rot back into the soil.

Due to his feet swelling and shrinking during a walk, we expect him to retie his shoes at least once. Sure enough as we turned toward the back part of the loop trail he meandered over to the plastic fence around the golf course and put his foot up on a rail next to a “post'”. The top of the rectangular post was missing and as his head got near the opening in the top of the post a burst of activity made him jump back. Two froggies were sitting inside the post just watching the event of the moment. They posed for three pictures including this one taken with flash activated. 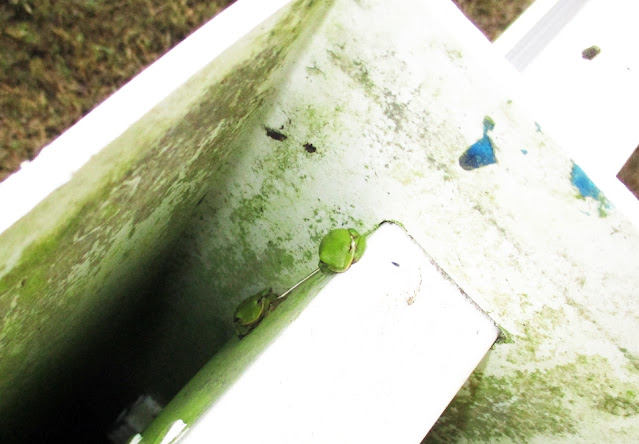 Several leaves were changing colors and we grabbed pictures of them for using as models in a painting. Maybe they will show up in a colored pencil painting within a year or so.


The OFM keeps having folks ask where we are heading when we leave. We tell them we will be heading West on I-20 from Birmingham Alabama. The part they have trouble with is the Teams do not have a fixed plan. That cannot be right, you HAVE to know where you will stay each night. After the second day when we enter Texas the plan is to meander until sometime next May when we plan to meander back to grandkid land. EVERY person we talk to from here cannot understand that we do not HAVE to have a fixed itinerary. BUT not having a fixed plan is the best way of trying to have tooooo much fun.