We awoke to a horrendous rain storm this morning. By the time breakfast was finished and some computer time was used the rain stopped. The local radar showed we had a few hours until the rain starts again so it was shoes on and out the door time.

As we headed out to the chosen trail for today, where we hoped it would not be too muddy, we passed through the center of the campground. Good grief these rigs are cramped up on top of each other was the OFM's thoughts.

The walk had several things new this morning and here is one of them. For some reason there were lots of spider webs in the three to six feet diameter hanging from the limbs along our route. We tried to get pictures of some of them but this one was the best we could do. 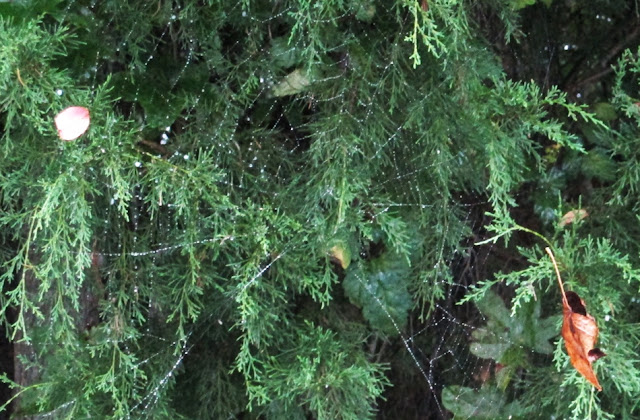 It was about four feet across.


In one part of the loop road we passed near a golf hole that has been a misery for the OFM in the past. When he slips a ball to the right of the fairway in years past, this was typical of his “easy” second shot to the flag. But the reality was that he was about three strokes from the green at this point. 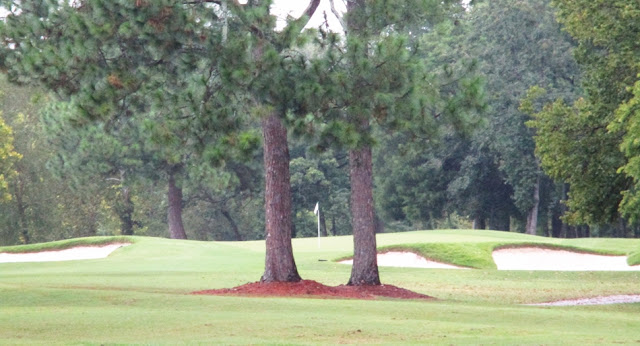 At least it was a pretty scene to enjoy as you messed up the hole score mightily.


Some time in late afternoon 1600 or so the storms started in with lots of enthusiasm again. There was flash flood warnings added to the fun.

Sure enough we are having serious rain until late tonight. We are hoping it works out OK. This campground is one that sometimes has waterfront campsites. The trouble is that the water fronts on the TOP of the campsite. We are fortunate to have one of the few higher elevation sites that only floods about every eight years or so.

A flooding campground does not lead to trying to have tooooo much fun.