It is 2100 most nights before we get time to start on the photos taken during the day, much less the blog entry. Tonight was no exception. At 2030 Sierra and the Teams was on top of a bluff over the lake shooting sunset/late evening pictures. That puts us after 2100 to start processing pictures and starting the beautiful literature the OFM is famous for  writing.

We had a couple of nice events on the rugged morning walk. The weather is a bit less hot first thing in the morning for the last couple of days. But this trail down onto the side of the canyon and back up for a grand loop of about a mile and a half was just calling loudly. So we listened and were well rewarded.

Food first please.  The prickly pear fruit on the cacti now is very bright reds or brilliant purples that seem to glow in the sunlight. Today we only encountered the red model. 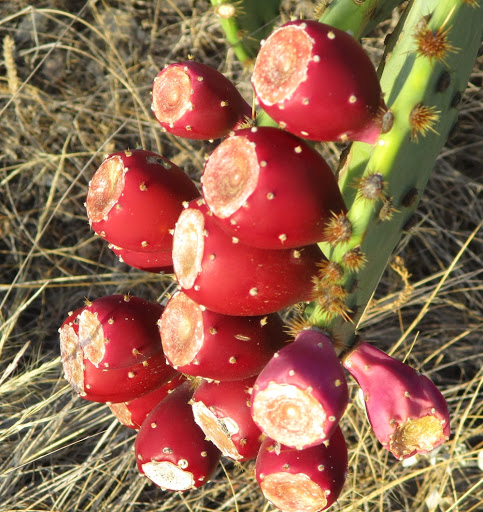 Then along the lower part of the trail we noticed a doe meandering along and we did not seem to bother her much.  When we got ready to take a picture of her, her protector raised his head from behind the brush to make sure we had honorable intentions. He was a good looking fellow wasn’t he.  We just got the picture and moved on with our walking. 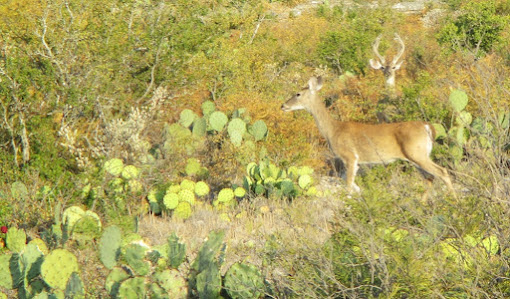 Lunch ended up being a stir fry of diced potatoes, bell pepper, onion and a sliced up ham steak. Seasoned to our choice and gently cooked it turned out wonderful. 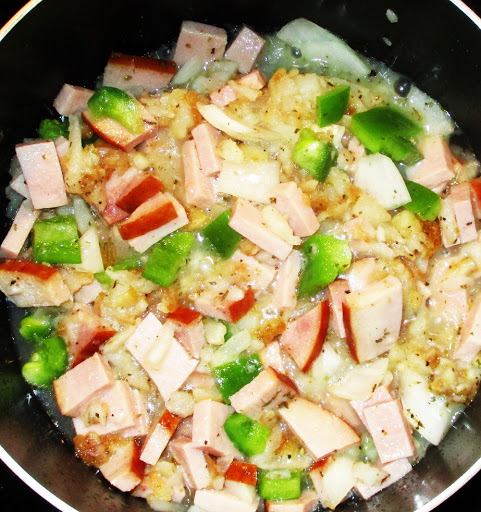 As the OFM was devouring the delicious meal a thought hit him in the back of the head.  He wondered how some Red Delicious apple peels chopped and put in the stir fry would taste. We bet they would be great especially with a dash of cinnamon in the assembly.  Nothing like a promising change to a recipe to excite the taste buds. Yum Yum.

We have over a hundred pictures waiting for processing so the OFM needs his rest. We bet he drifts off to sleep and dreams of some of the things we have waiting to do for trying to have tooooo much fun.