As we rolled into the Beach Park this morning we hoped to get a decent walk done in spite of the ferocious winds again. After parking Sierra out of the wind and salt mist we headed for some foot work, but before we got it going very well the skies started to put on a big light and cloud show. The OFM JUST HAD to take some pictures of the clouds for reference for his art efforts. Here is one of them. 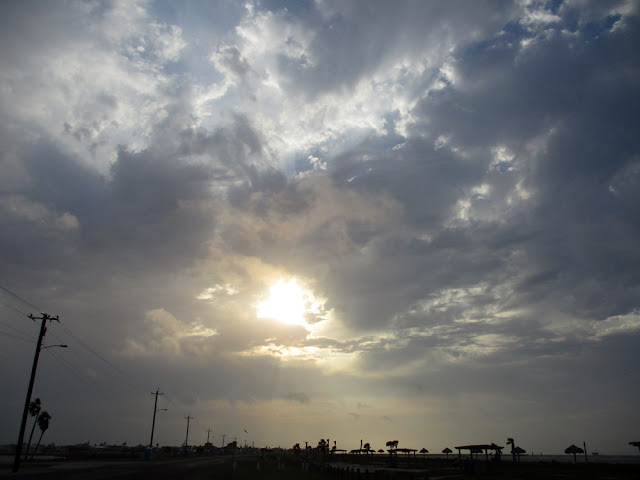 As we walked like a drunk drunk in the high winds, the OFM took several more shots that are now stored in the reference files on the computer.

We made a decent slow distance and when we got close to Sierra we called it quits. The wind and mist was just too miserable. As we pulled out, Sierra suggested we hit up Memorial Park with all its trees for some wind protection and some more walking.

When Sierra got us there the place was looking really good. The winds were down to a nice breeze at the ground level. The tops of the trees were blowing all over the place but at the walking level we were in good condition.

So the camera was grabbed and away we went. We made good time and distance. It was just plain old nice at this park. That was all the excitement until late in the afternoon.

We headed to the Beach Park to check on the wind and wave action. As we drove along the park road we noticed a nice size fishing boat broached in the beach waves. Then it became obvious it was too close to the beach and caught between two sandbars and out of control. Two folks were working on getting things out of the boat and to some folks standing on the beach. We could see the waves breaking over into the boat but the boat was sitting on the bottom between the sandbars.

We went on down to the end of the road. A few minutes later a Rockport Police car came through and the OFM flagged it down. The OFM told the officer about the boat in the surf and maybe they needed help. The Officer told me he was hunting for the boat since he had a call about a person needing help form getting hit by a running boat propeller. The OFM showed him where the boat was and the officer headed over to the scene. About the same time he got there and ambulance showed up. The medical crew went to the beach and did a little bit of looking around. Then they came back to the ambulance and got a wheeled table and went back to the scene at the beach. About five minutes later they took the table back to the ambulance and loaded it in. We could not tell if someone was strapped on the table or not, but they did leave the park with their lights flashing but no siren. So maybe there was a patient in the ambulance but it was not life threatening.

The police stayed a bit longer and then a Texas Game Warden showed up and the local police left. When we left the area the boat was swamped and getting bashed by the waves. 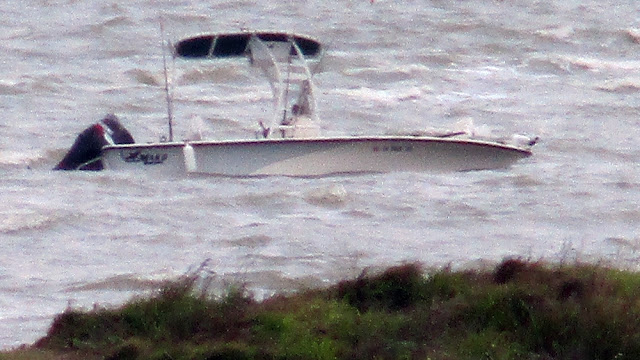 We just minded our business and kept on going and got clear of the area. Maybe tomorrow I can ask around at the beach park and see what the story is all about.

We do not recommend sinking your boat or getting cut up by the propeller as the proper type of excitement for trying to have tooooo much fun.