The morning walk was easing along at a nice pace. The OFM had chosen to walk the 3 mile paved road around the golf course. That is 3 miles from the Castle and around the course and back to the Castle. It took about an hour. As we got close to the spot where we cut back into the campground, a very loud fire engine came flying by with blaring sirens and whipped into the campground.


Of course the OFM's first thought was what did he forget to cause a fire in the Castle. We kept on walking toward the Castle. In a little bit we could see the red flashing lights over in the area of the Castle. Finally we got close enough to see there was not a fire and the fire truck folks were interested in a rig across the street from the Castle. We were relieved that there was no fire in progress.

We got to the Castle and stayed out of the way and watched. Firemen were inside the RV but no fire fighting gear was being activated. About then a new siren could be heard and it made its way to the rig of action. 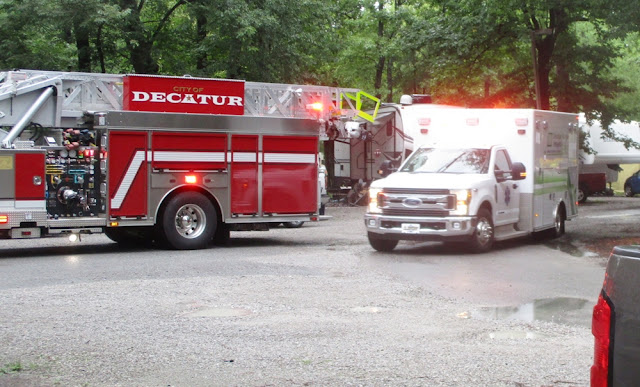 It was an ambulance and its folks went right into the RV and shortly after a fireman came out and got a stretcher and went back into the RV. About now the OFM decided he needed to stay out of the way and went inside the Castle. The activity cleared out after a little while and all was quiet. When we looked outside again, the RV was all closed up and quiet. We have not yet asked the hosts what happened.


The Teams had an easy morning after all that excitement and worked on a painting and did some house cleaning. Lunch was half of a large baked potato with pulled pork. It was big enough that it was also supper tonight. The afternoon was the start of another adventure that will have to wait until tomorrow night for details of that adventure in trying to have tooooo much fun.